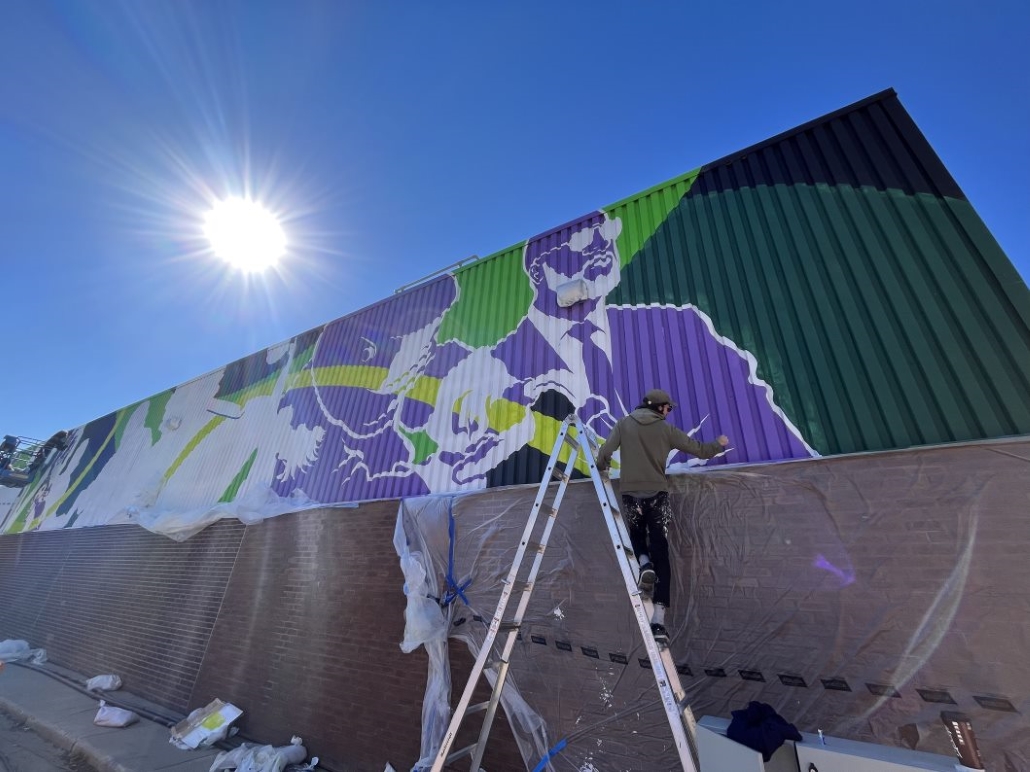 “The blank canvas of the long, exposed wall of the Welikoklad Event Centre is a fantastic medium for communicating what Red Deer Polytechnic is all about,” says Dr. Jonathon Penny, Dean of Arts and Culture. “Dr. Alison Jeppesen and others, who imagined this use and garnered support for it, determined to hire an alum in order to capture the spirit of RDP, and we are fortunate to have Kat work on the project. Their vision represents RDP’s history and its spectrum of program offerings beautifully.”

Simmers, a former Red Deer Polytechnic Visual Art student, began painting the mural in early September, highlighting a variety of programs and learners at the Polytechnic.

“With Flying Colours depicts a diverse body of students engaged in their respective crafts. It was an interesting challenge to create a work representing the experiences of so many people - students past, present and future,” says Simmers. “I wanted to pay respect to the value of athletics as well as the diverse mix of creative arts learning and trades programming that students experience at the Polytechnic.”

“I thought of the welder as an artist crafting a sculpture as much as a tradesperson earning a wage. I made my way through six years of art school by working various labour jobs,” adds Simmers. “It was the creativity and passion for learning I developed at RDP that led to success in those environments as well. I wanted to capture the spark of innovation and joyful work environment that I experienced at the Polytechnic.”

The education and training Simmers received at Red Deer Polytechnic helped with the creation of the mural and set the groundwork for future artistic endeavours.

“At the Polytechnic, I spent a lot of time working with colour and figurative painting. As my education continued into design, that sense of light and life stayed a core part of the worlds I like to create. RDP’s Visual Art program is incredibly inspiring and supportive,” says Simmers. “Having 24-hour access to gorgeous studios created a wonderful sense of community and fostered some amazing friendships I still cherish to this day. The years I spent at the institution also laid the foundation for future learning.”

As Simmers plans to complete the mural in late September, their brother Derek, who is also an alum of Red Deer Polytechnic, will assist with the finishing touches during the final week.

“Red Deer Polytechnic’s alumni are incredibly talented and are leaders in their communities and professions, as demonstrated by Kat and Derek,” says Richard Longtin, Vice President, External Relations. “With over 80,000 alumni, we are extremely proud of their impact and contributions to the intellectual, economic, cultural and social development of the region, province, and beyond.”

As the mural creatively represents the Red Deer Polytechnic brand, including the many benefits of a polytechnic model, it will also connect the institution to the community.

“This work is to remind people to take joy in their craft, to care for their community and to share the fruits of their labour,” says Simmers. “I’m grateful for the opportunity to build on my experience at RDP and it’s exciting to be able to return those gifts in some way.”

Get to Know Us